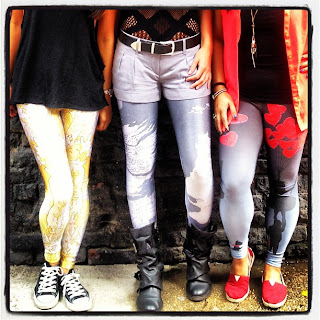 Yesterday was a very fun day to remember.  I had the opportunity to meet the creator behind the LA based clothing brand, Poprageous.  Poprageous came into my life in the beginning of the year and was introduced by my friend Patricia.  She told me about a girl who liked Black Milk Clothing, but decided to make her own leggings.  There was a secret release coming out for a special pair of leggings that I knew I had to get.  I bought them and immediately fell in love with them.  The waistband was comfortable, the fabric was shiny and stretchy, I loved the design, and it wasn't too long around the ankles.  I didn't feel like I was suffocating with these leggings as I did with other pairs.  I ended up ordering two more pairs and I was quite content with what I received.  Even though I was happy, I still wanted to know the person behind the company... so I reached out to her.  Surprisingly, she gave me her hand. 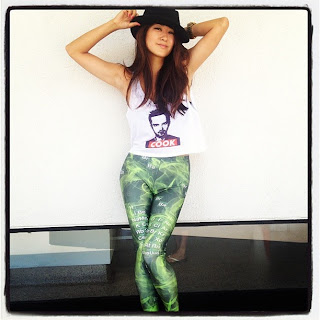 Cher Park is fun, down to earth, and very upbeat.  She's a Korean American who resides in Los Angeles, CA and holds a bachelor's degree from Cornell University.  She worked in finance for three years in NYC before returning to LA to do what she loved to do - fashion.  She worked in both Shoe Dazzle and Forever 21's headquarters before realizing she could create her own clothing brand and run it as her own.  She bought some fabric and attempted to make her own leggings by cutting out a pattern and sewing it properly.  Once she was done, she ended up posting it to the Black Milk California group to show her finished product to the other girls.  They all started giving her positive reviews by commenting, "Make me one too!"  She decided to find a way to make the ideas swirling around her head into reality.  Cher ultimately quit her job and started working to create clothing full-time, roughly about 7 months ago.  Upon doing so, she's created a fan base of up to 15,000+ people on facebook and over 31,000+ followers on Instagram.  Not bad, if I don't say so myself.  Throughout it all, she's gotten quite a few haters claiming she's been stealing ideas off of Black Milk since she was also a Sharkie, but after having a few conversations with her, that is obviously not, and ever will be, the case.

It started one night while I was having insomnia and I couldn't fall asleep.  I decided to message Cher about wanting to buy a pair of leggings that were out of stock and I was interested in finding out when she'd restock them in my size.  She was nice enough to message me back quickly to tell me she'd be getting them in soon.  We somehow got into the conversation about where her ideas for her work came from and what she was interested in doing with Poprageous.  She told me she wanted to create a balance between craziness and normal, so her clothing line would attract all people - not just one group in particular.  She wanted to see her fans and people all over the world wear her leggings because she thought of them as little works of art.  Each article of clothing had a story behind it.  She gave me the stories of how and why she chose those prints in particular... and I was very excited to see that she wasn't just doing it for the sole aspect of making money.

Cher has an artistic way of thinking - she doesn't just say, "This pair of leggings will be $75 and it will make me a profit," but instead says, "This legging pattern was inspired by Banksy's work with a boy holding flowers and a girl who couldn't trust him, which is why she holds a bat behind her back.  My rendition of it wanted to give the illusion of what happened next.  I wanted the boy to save the girl floating away from him, grasping on to show he cared about her."  I told a lot of respect for someone who thinks out of the box and who could tell a story through her work.  As a fellow artist, I know the cut-throat views of the art world and I know what it feels like to have people criticize you because they don't understand what you see.  Someone who owns a clothing company may just see future dollar signs after they've created their work, but she sees something more and that's the beauty of her fashion. It isn't just something to wear; it's art.  This is a girl I saw a lot of myself in and I knew I wanted to be friends with her.  We almost think and act alike, and I love that about her.

Last weekend, she called me to let me know she was coming to NYC to visit some friends and she wanted to know if I wanted to have lunch.  I agreed and I invited some of the Black Milk girls from the East Coast to come along because they too were also fans of Poprageous, but most of them couldn't get out of work.  One girl, Jonna, was able to come down and meet with us, so the more the merrier.  The three of us finally met up and we had lunch over at Freeman's, which was this small "hole in the wall" place that had some pretty good food (the burgers were a bit rare and salty though).  We discussed what were the next steps of Poprageous and what were her plans for the upcoming seasons.  We talked about how we hated customs fees and how we could avoid the problems of shipping costs and how she wanted to see Poprageous grow.  Jonna talked about her home country, Germany, and how different it was from the states.  We were like old friends catching up.  It was nice.  Once we were done, Cher STOLE the bill from us and paid for lunch, even though we tried to argue.  We then took some pictures outside on a graffiti wall and walked to Wafels & Dinges for some dessert.  After dessert, Jonna had to go back home, so Cher and I took the train back uptown to find some fabric she could use.  She got a few more ideas in her head and is planning on getting ready for the fall season.

I can say with confidence that Cher is a fantastic person and I think Poprageous is in amazing hands.  She knows what she is doing and has a good head on her shoulders.  She will be able to carry her team and take them to the top of the fashion world.  I'll be around to help her every step of the way.  All the haters can just shove a sock in their mouths because she really isn't trying to copy anyone.  She's trying to get things done her way and she plans on doing anything she can to get it right.  If anyone complains about her pieces looking "similar" or "identical" to Black Milk, they shouldn't complain because Black Milk's "original" patterns were actually just designs from iStock or fabrics from stores in the city like Spandex House.  Cher's artist series is also coming along nicely, where she collaborates with many artists and puts their work on her leggings.  I can't wait to see what she'll be coming out with within the upcoming months.  You might see some of my work up there too (**wink wink**).  I was lucky enough to get a sneak peak of a few things, so some exciting things are coming up along the way!  Get ready for it!  Keep a look out for this lovely lady!  She'll be popping up all over the place soon enough.