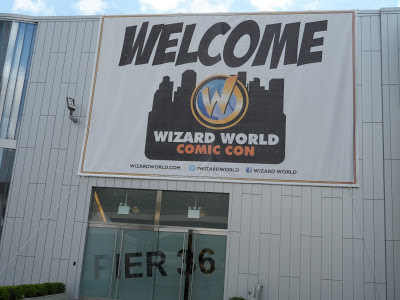 Hello everyone!  I apologize for being MIA over the past week or so, but I've been out and about.  In case you didn't know, I've been in Mexico enjoying the sun and the sand.  Before I left, however, I had the opportunity to make a pit stop at Wizard World Comic Con in NYC on the 28th.  My mom was a bit annoyed because I decided to go to Comic Con the day before I had to hop on a plane, but I have to be a super nerd at least once a month and it just so happens that Wizard Con fell on the day before I left.  I bought my ticket a few weeks before, costing $40 per person just for Friday alone.  Considering what happened during my other trip to Philadelphia Comic Con, I was very apprehensive to go this Con because I wasn't sure if it was going to be a repeat of last time.  Much to my surprise, however, the venue wasn't crowded and I didn't have a hard time navigating through the area. 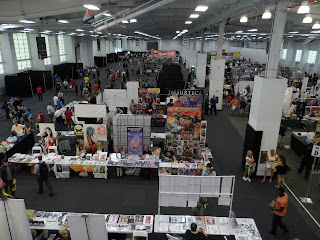 
My other half and I took the train to the city around 3PM because the Con didn't start until 4.  We had a quick lunch and finally got there.  The pier was a bit cloudy from the storm clouds threatening to rain on our parade, but the sun finally came out.  We got onto the line for general admission and got our limited edition Walking Dead #1 Variant Comics.  I have to say it was more organized than some of the other Cons I've been to.  In Wizard World spirit, VIP members were allowed to cut in front of us and get ahead in the lines, but there weren't many people around.  We got in at exactly 4PM and the usual merchant booths were there - the comic shops, toy shops, CGC, and shirt stores.  I was more interested in getting my comic signed by Neal Adams, who was an artist known for his work with DC Comics and a few Marvel Comics.  He was the artist for Batman and Superman comics back in the 1960's.  We walked over to his table and found out he was charging $20 per signature, which I wasn't too thrilled about. 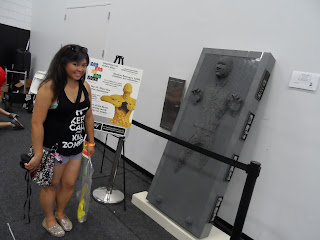 The LEGO Experience - The Art of the Brick
Discovery Times Square


We ended up not getting the comics signed and walked to the Desert Wind Comic booth to learn more about getting our comic books CGC'd (Certified Guarantee Company - known for authenticating and grading comic books).  I found out I was going to have a problem with the comic books I got signed last time because I didn't get them graded as soon as I got them signed by the artists and Stan Lee, which is going to lower the grade of my comic book because CGC had to verify and watch the comic be signed by the person.  On top of that, having a comic book graded is about $35 per book, and that doesn't include shipping and handling.  FedEx will ship the comic book back to you for $20, and it's 5 for each additional comic.  I didn't know the world of comic books had so many rules and regulations in order to raise the value of it.  I guess that just goes for everything.  I'm just glad we got to find out some information on the comics so we can get better prepared for NYCC in October.

The venue itself wasn't really that big - it was a warehouse with all the tables and chairs filling the space.  Wizard World is usually known for their celebrities, so of course I would be stalking the Walking Dead actors and actresses.  We found out last minute that Jon Bernthal (Shane) cancelled his appearance and Danai Gurira (Michonne) was going to show up in his place.  The only sad part was that she and Laurie Holden (Andrea) were appearing on Saturday and Sunday, and I was going to miss them because I'd be in Mexico... not that I minded, haha.  I'll have to find them at the next Comic Con when they come around.  What was nice about this Con was that it wasn't as crowded, so my boyfriend and I were able to move around freely without feeling claustrophobic.  On top of that, the move stars were just walking around the floor without guards and saying hello to people.  Oscar has never seen me act like a teenage school girl all head over heels before, so this was a first for him.  He was walking next to me and Norman Reedus passed right by us.  I looked up and I just froze and "EEPED" like a chipmunk.  It was quite hilarious... my face turned red and I had this huge goofy smile on my face.  I can't help but get star struck when I finally am within 5 feet of a celebrity whom I find to be super attractive!  I was like jelly for about 15 minutes after that.  Needless to say, Oscar was laughing at me the whole time. 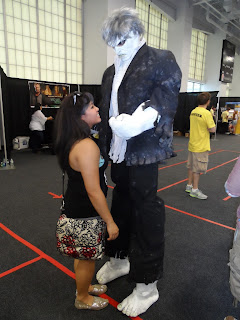 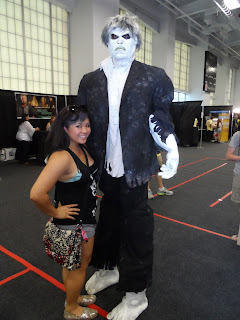 
Unlike my last experience, I was able to walk up to everyone and say hello.  I was too shy to walk up to Michael Rooker (Merle), but I did wave at him and smile and he waved back.  I did, however, come up to Norman Reedus (Daryl) and shake his hand once again.  Oscar was thrilled to meet him as well and he was just SO NICE!!!  We had a nice conversation about Walking Dead and I begged him not to get killed off in Season 4.  He laughed at my comment and he said he can't give any secrets away about the next season, but I'm obviously excited to watch.  This time, I didn't have to wait on a line and I didn't have to pay for anything, which was so nice.  I also came up to Henry Winkler (Fonze from Happy Days) and chatted with him for quite a bit.  I asked him if they were planning to make the next season of Arrested Development and he said they were in talks, but he wasn't sure yet.  I hope they will be able to produce another season, because that show is hilarious. 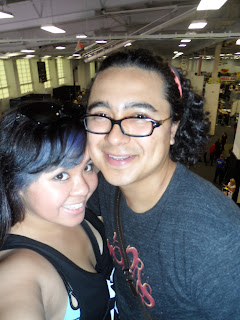 Anyway, after stalking all the celebrities, we walked through artist alley.  I'm very particular with all the artwork I choose for my house, so not many artists stuck out for me here.  I'm not sure if it's because the tables were more expensive, but there weren't many artists to see.  There was one artist who was there and I kept coming back to his table to just take a look at all his work.  His name is Michael Banks and he's the artist for his company called Sugar Fueled Art.  His art focuses on a cartoonish Candy Land standpoint while the subject looks like they have been doused in sugar and sweet.  He transforms any character into this tooth-achingly sweet piece of art.  I was so torn between which pieces to buy, so I ended up buying three of them.  Edward Scissorhands is going on Oscars wall, while the other two are going on mine.  If you're interested in getting his artwork, come check his Etsy page!  He and his wife are from Florida and both of them are of course, super sweet!  We got around to talking because they were friends with Michael Locoduck Duron of Locoduck Studios, another fellow artist I met back in Philly.  They saw me carrying his work and wondered if he was at the Con as well.  They will both be at NYCC, so I'm excited to see and support them both! 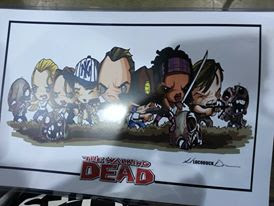 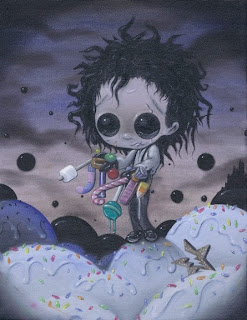 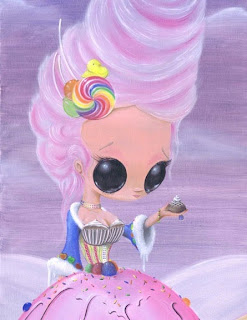 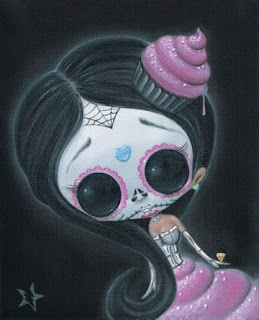 Day of the Dead Girl

None of the panels were too interesting at the Con, so we just walked around some more and Oscar and I ended up getting some limited edition Spider Man comics, a Chew San Diego Comic Con exclusive variant, and Harley Quinn.  We didn't buy anything else, because most of the other stuff wasn't really necessary.  The only thing I really didn't appreciate about this convention was that everything needed to be purchased.  Nothing was really free and the tickets were a lot more expensive than they should have been.  I wish they gave out more stuff and I really do hate those rules about VIP tickets and cutting the lines.  Stan Lee showed up for a panel, but of course, that was only for his VIP members... so we couldn't go, but it's all right.  I met him at the last Con anyway.  Overall, however, it wasn't too bad and I did enjoy walking around.  We'll see if I end up going to the next one when they come back to NY.  Boston is coming up, though! 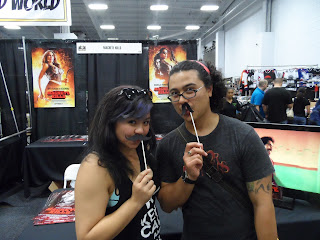 I mustache you a question...
"Should I go to the next Con?"

Anyway, until next time!  I have to tell you all about my trip to Mexico... AND I have a new polish blog coming up!!!

Disclaimer:  I was in no way endorsed by any of the artists or companies mentioned in this blog.  All these words are mine and are from my own thoughts about my experiences.  Thank you.

Email ThisBlogThis!Share to TwitterShare to FacebookShare to Pinterest
Labels: work